This week I've made some progress on the applique blocks for the the Mill Girls book.  The quilt is a medallion style book and has four applique blocks at its center.  Here is the main block with the applique prepped and glued in place.  The "factory building" is sewn down as is the sun and the moon.  All of the fabrics are from the new Mill Girls fabric collection Judie Rothermel designed especially for this quilt, plus another quilt I've designed for a block-of-the-month program with Marcus Fabrics (more on that later once I start making that quilt!) 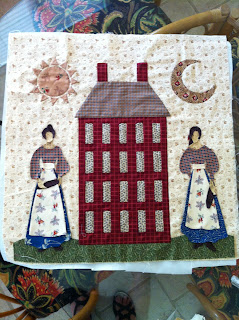 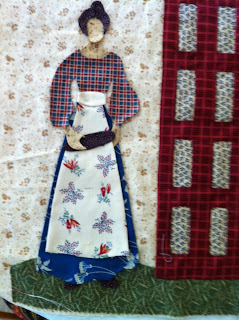 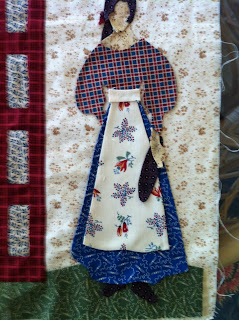 The "brown thing" both girls are holding are shuttles, a tool used in textile manufacturing.  Once I start sewing the patches down, I'll cut out the center of the shuttle patches, so it better resembles a shuttle, not a loaf of French bread.

A shuttle is a tool designed to neatly and compactly store weft yarn while weaving. Shuttles are thrown or passed back and forth through the shed, between the yarn threads of the warp in order to weave in the weft.
The simplest shuttles, known as "stick shuttles", are made from a flat, narrow piece of wood with notches on the ends to hold the weft yarn. More complicated shuttles incorporate bobbins or pirns.

Originally shuttles were passed back and forth by hand. However, John Kay invented a loom in 1733 that incorporated a flying shuttle. This shuttle could be thrown through the warp, which allowed much wider cloth to be woven much more quickly and made the development of machine looms much simpler.