Away From Home: Quilts Inspired by the Lowell Factory Girls 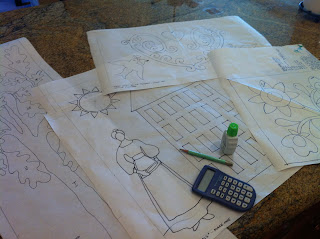 After working on them for two days, I finally have the applique blocks drawn for the book on the mill girls.  The quilt has a center medallion made up of four applique blocks.  Then, in the border blocks that surround the medallion there is one applique block repeated eight times.  There are other blocks in the border round, but they are pieced.
So now that I have my master patterns--and my fabric which arrived fresh from the factory on Friday--I'm ready to begin.  There's still a lot of prep work for the applique since I like to use the freezer paper and starch method.  And, it's almost inevitable that I will make changes as I work through the quilt construction.  You know how it goes, sometimes a fabric you thought would look perfect, doesn't.  Or you want to add something.  Or subtract something.
In any case, I am so, so excited to get this project going. 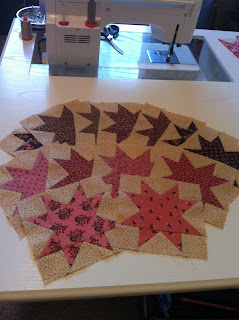 Oh . . . and I've been working on another quilt for the book.  It's going to be one of the additional projects.  Here's a little peek at some of the stars that are going into this pink and brown beauty made from the Cocheco III collection by Judie Rothermel for Marcus Fabrics.