Getting to Know Hue and the Silhouette Cameo

Last week I introduced Getting to Know Hue,  my new block-of-the-month program and fabric collection of the same name.  It's a 12-month program featuring a medallion style quilt. Now those of you who know me or are familiar with my quilt tastes know that I love adding a bit of applique' to a pieced quilt. In fact, some of my previous BOMs such as Amish With a Twist Series III  have even featured a pieced option vs an applique' option.

So here is the center lone star in Getting to Know Hue. Isn't the applique' just what it needed? 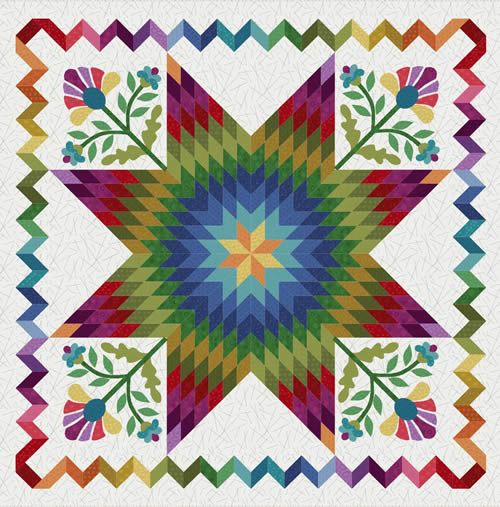 Now, of course I know some quilters groan or have some kind of allergic reaction to applique'. "I do not do the A-word!" is a statement that has emphatically been hurled in my direction on more than one occasion. However, I remain undaunted and unfazed by these statements. After all, I did teach junior high for over 20 years.  If I can get thirteen year olds to write essays, I can get quilters to do the A-word.  And, now, thanks to the Silhouette Cameo it is even easier. Here's what this dream machine looks like--no it's not an ink-jet printer although it sort of operates like one.

My Cameo arrived about eight months ago.  I first saw it at Spring Market in Portland and was intrigued. However, the very nice gentlemen demo-ing it were cutting up mostly paper and showing it mostly for scrapbooking purposes.  Of course I asked about quilting possibilities--what fusible? is there a different knife needed? is there a larger sized mat? They handed me a brochure and directed me toward the website.  My husband Oliver who was helping me out in my booth told me to just buy one.  So I went back to the booth and discovered that I couldn't just buy ONE--there was a minimum. Drat! I am a designer not a shopowner, so I don't need a bunch to sell. Guess it wasn't meant to be.

Another Market came around and I was once again vending.  On my way to the ladies room, my head swiveled around--hey, there were the Silhouette folks again. I made a beeline to their booth and watched their demo. Boy did these guys have it dialed in now! All those questions I had before were now part of their pitch. Do you know that feeling when you really want something, really think you NEED to have this thing? "I want to buy it!" I blurted. "But I just need one.  Please, please let me buy just one!" Pathetic. I know. And, well, you got it. I could not get just one. I shuffled off to the ladies room and then headed back to my booth. But I could not get that darn thing out of my mind. I could just see myself doing all kinds of wonderful applique' with the thing.  On the last day of Market when it was slow in the afternoon, I made my last pathetically desperate attempt at getting one of these babies. I went back to the Silhouette booth, humbled myself, and begged. "Please. I am a designer. I only need one machine. If you won't sell me one, can you GIVE me one? (crazy logic, I know) I will blog about it. I will use it for the quilt patterns I design. I will do whatever." Back in my booth, I sat dejectedly, sans Cameo, mulling over how I could get a machine.

Several months later, when I was ordering from a notions suppliers, there it was: SILHOUETTE CAMEO SPECIAL PACKAGE. My heart skipped a beat right before my finger clicked to add it to my cart. And guess what--it added ONE Silhouette Cameo to my cart. Not three, not five, but ONE. As soon as it arrived, I began playing with it. Cutting fabric. Experimenting with fusibles. Trying out decorative threads. And then I learned how to do the BEST THING EVER with it: import my own applique' files. This was a game-changer. I was able to cut out the applique' for my new BOM in an afternoon and had it sewn down that evening.

And here is a picture of pieces all cut out and ready to go. Look how perfect and crisp they are. 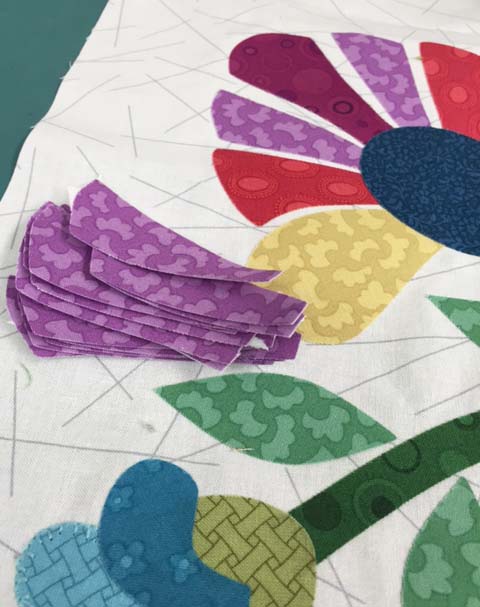 And here is how beautiful the applique' looks. BTW, this picture shows the grey background option. I used Aurifil 28 wt thread for the buttonhole stitch. 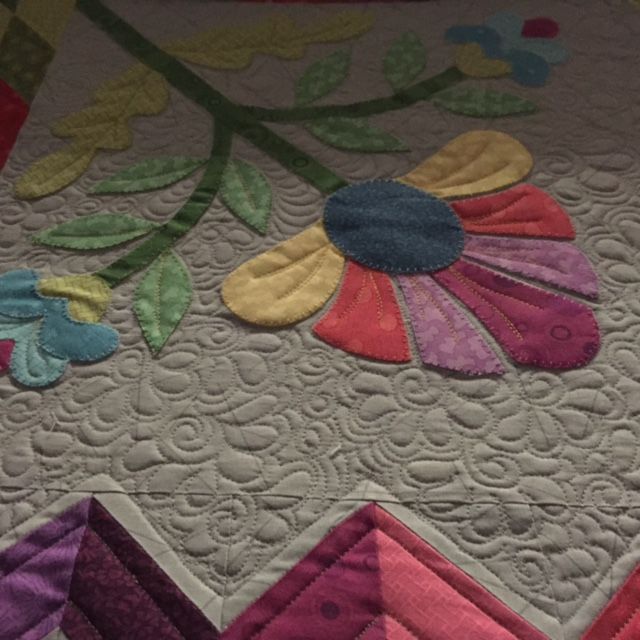