Okay, so the tree block I posted last time is not done.  I've been working on another quilt that I have to get done next week.

Then my laser printer had a snafu and paper wrapped around one of the rollers.  I painstaking pulled the paper off, but still can't get the darn thing to work.  The error light is still blinking and the screen flashes "jam in output bin."

To top it all off I had a sewing accident last night.  I did something I'd never done in my forty some years of sewing:  I sewed through my finger on my sewing machine.  And yes, I'm having a hard time typing not using the finger.  The offending finger is the ring finger of my left hand.  For the life of me, I don't know what happened.  I was sewing like a mad woman,  trying to get the last border put on the quilt that has to be done next week, when Oliver walked into the room and started talking to me.  I looked up, taking my eyes off what I was doing and "BANG".  The sewing machine needle was in my finger and actually broke off of the machine and was sticking out of my finger. It had gone through the top of my finger, nail side first but did not break the skin on the other side, although I could feel the tip of the needle when I touched the pad of my finger.  I had Oliver get pliers--he went out to the garage for his needle-nosed pliers so he could get a good grip--and told him, "you'd better pull hard and get it out on the first try." Thankfully, he did.  Then he filled a coffee mug with ice and a little water and told me to put my finger it it, which I did.  We debated about going to the emergency room but wondered what a doctor could do at that point.  The needle was out, and ironically, the only evidence left was a little red dot on my fingernail and a tad bit of bruising.  Oh, and I also took an extra strength Tylenol which really helped.

So, this morning I felt pretty good.  The finger is sore--sort of feels like its been slammed in a door.  So I finished the block I'd planned on finishing last night.  Now I will always think of my finger when I look at this block.  (this was photographed when all the patches were glue basted in place) 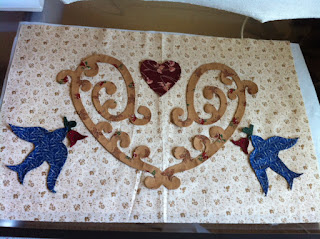 By the way, Oliver freaked me out some when he got up this morning.  He walked into the family room and saw me sewing, and said, "You know, I've been thinking . . . what happened to the thread?"

By accepting you will be accessing a service provided by a third-party external to https://nancyrinkdesigns.com/