Amish With A Twist - Pattern Corrections 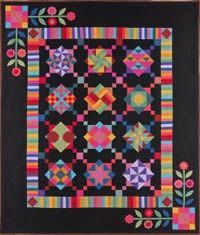 Note: If you have already cut your borders 65″ long, cut two 10 1/2″ squares from the Black fabric and sew a square to each of the 65″-long borders on the end opposite the appliqué.

Stay current on specials and what’s new with Nancy!